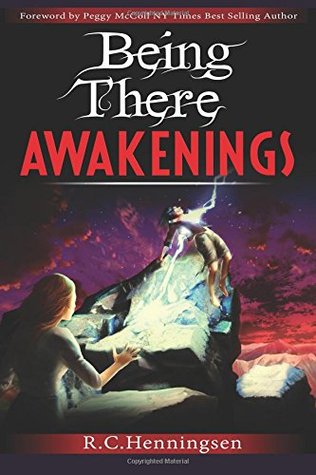 Christian Asher had all the promise of any soon to be college junior. Handsome, athletic and bright, he prepared to embark on his future, a future filled with events far beyond his wildest dreams, or maybe not? Christian has a secret, a secret hidden deep within the recesses of his mind. (Goodreads blurb)

Being There Awakenings by R.C. Henningsen gave me SO MANY MIXED FEELINGS. It was very long, around 450 pages, and unfortunately it didn’t start to really interest me until about page 200; halfway through the book.

I thought it had an interesting concept, but the storyline was foggy, and I really didn’t see a clear plot. The grammar was sometimes not-so-great, and the writing was broken up and read strangely.

The love interest (Amy) was introduced and basically immediately became Christian’s girlfriend. I liked her character, but I felt like their relationship building was just skipped over, and I really didn’t understand how they got to be as close as they were. When new people were introduced, their entire life story was just laid out in a paragraph, and their background/entire character was that paragraph and only that paragraph. Therefore, when three were introduced at one time, I would immediately forget everything about all three, and it made it so much more difficult for me to discern between characters. I frequently mixed up a couple of his friends, and when they had nicknames, I had no idea who was who. I didn’t understand Christian’s past, and his time with his old friend was skipped over quickly as well, so although Christian knew him well, I didn’t know him at all, and I didn’t understand his motives or any of their inside jokes.

At the end of the book, I tried to figure out what the title meant, and although I think I have an idea of what it might represent, it still doesn’t make much sense, and it wasn’t directly related to the book, so that really confused me. Overall, the book probably could have been condensed to half the size, clarified some things and edited grammar, etc., and it would’ve been great.

I suppose you’re probably all wondering why I didn’t give it one star, with that many things I didn’t really like. However, even though they were under-developed and didn’t grow nearly as much as I thought they should, I liked Amy and Christian’s characters, and Christian’s friend as well. The story idea was really interesting, so once I got past the halfway mark and the plot really started, I couldn’t put it down, and I was able to get carried away in the flow better. I went into this book very analytically (as I do all of my review requests; I want them to be professional and as detailed as they can be for the author), and although it obviously wasn’t my favorite book ever, it was still interesting, and I think someone else might enjoy it a lot more than I did.

Have any of you read this book? What did you think? Are you planning on reading it? Let me know down in the comments; I love hearing from you guys! Toodles!

One thought on “Look to the horizon! I see review requests!”