Hey guys, it’s Amy! I recently wrote a review for Supremacy by Christin Lee at the request of the author, because I’m catching up on ARCs! After finishing that book, I got started on the next one- Diamond Bonds by Jeff Kish. Whiiiiiiich I just finished. And. Um. WHAT. 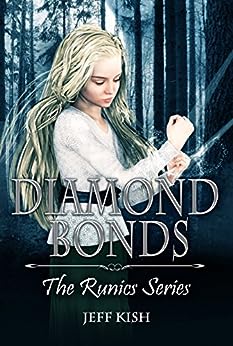 Era and Jem have been partners in crime for almost two years, stealing their way through life, Jem teaching Era what she knows. They’re attempting a raid on a train one night, hoping to gain some valuables, when they find a young girl, the only “cargo” on an otherwise normal military train. After rescuing Di, not knowing her worth, Era and Jem attempt to return her home, overcoming many obstacles along the way, barely escaping the clutches of death and Di’s former captors.

First of all, I would like to give a huge shout-out to the author, Jeff Kish. He originally contacted us back in January (I believe), and then again checked up on me a couple of months, offering a revised version. Finally, I contacted him (when opening the 650 unread emails) about still doing a review, and he sent me a copy of the (now published) book. Needless to say, he’s been incredibly patient, not to mention understanding, and I sincerely apologize for not reading Diamond Bonds sooner! (I regret this. Very much so.)

I really enjoyed this book! As much as I love other genres, fantasy is my default, so I was very excited to read it. I was not disappointed! Era and Jem live in a world separated into two kingdoms (with different race). Jem is Allerian, so she is frequently discriminated against. However, no matter your race/loyalty, you have some kind of magical power. We learn early on in the book that Era is an earth shaper, and Jem is an ice maker, and we get to watch their powers grow throughout the story.

Aaaaaaaaand there was an assassin. Let’s just get this over with, guys: I LOVE ASSASSINS. A LOT. THEY ARE CUTE AND CUDDLY AND SO MURDERY AND AWESOME AND I REALLY LIKED THIS ONE.

Di was 13, whiney, smart, and rather “soft”, but she was just so darn adorable and I couldn’t help but love her more and more (especially since her power was so cool). The dialogue was realistic, and usually necessary/well-placed. All of the characters were very intriguing, and although their pasts are sometimes guarded, it makes sense towards the end of the book.

Speaking of the end! Um! What! Even! Was! That?!? I SO did not see that coming. I had no idea, and that was so neat! I now want to know ALL the logistics and history. In other words, GIVE ME THE NEXT BOOK. NOW. THANK YOU VERY MUCH.

Okay, I feel like I have not properly expressed how awesome this book was. Let me make this VERY CLEAR: THIS BOOK WAS AWESOME. VERY. AWESOME. VERY AWESOME. YOU SHOULD READ IT. NOW. AND THEN WE CAN COMPARE THEORIES. PERIOD END OF STORY. GOOD DAY. (Toodles!)

9 thoughts on “It’s FANTASY. And there are ASSASSINS. I LOVE IT!”